Stephanie Nolan reads from "28: Stories of AIDs in Africa"

Stephanie Nolan, then African correspondent for the Globe & Mail, read from her new book, "28: Stories of AIDs in Africa". The book profiles 28 Africans who have HIV or AIDS, or have otherwise been affected by it. The number 28 was chosen to reflect the 28 million Africans who had HIV in 2007, according to UNAIDS. Nolen spent six years traveling through Africa to gather the stories. The stories range from orphans, a truck driver, a miner, and a grandmother raising her grandchildren alone in poverty, to college educated patients, military members, clergy, and even Nelson Mandela, whose son died of AIDS. The reading raised over $6,000 to send to grandmothers in Africa.

A Doctor talks about a "Doctor's Quest" 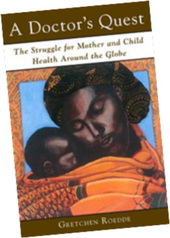 Gretchen Roedde, daughter of Bill Roedde and ex-Islander, held a book reading of her just published book A Doctor’s Quest:  The Struggle for mother-and-Child Health Around the Globe.  Gretchen held the book reading as a fundraiser for the Island’s “Grandmothers in Spirit” in support of the Stephen Lewis Foundation (SLF).

Born in Thunder Bay, Ontario, Roedde grew up on Toronto Island.  A medical doctor, she worked extensively in northern Ontario training Aboriginal health workers in remote settlements, taught health workers from developing countries in Liverpool England, and then began a career that took her to Africa, Asia, the South Pacific, and the Caribbean on medical missions. She now combines planning and evaluating health programs in developing countries with a general medical practice in the Temiskaming Region of northern Ontario.

Gretchen’s reading and her stories were spell-binding.  What was most amazing is her incredible will and determination to continue her 25 years of work in the 30 or so countries she has visited, in the face of so much political disinterest, corruption, red tape and entrenched cultural values. Admission was by donation only, and at the end of the evening we had raised an astonishing $2,000 plus.