grandNIGHT: A Gala Fundraising Night in partnership with Nightwood Theatre 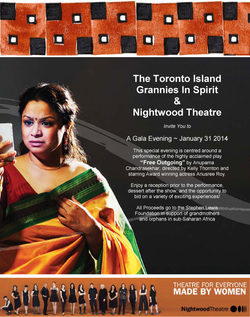 Toronto Island Grannies in Spirit was excited about their foray into the world of the stage with grandNIGHT, a gala fundraising event in partnership with the acclaimed Nightwood Theatre. This exceptional evening took place on January 31, 2014. The event was held in conjunction with the North American Premiere of “Free Outgoing”, a highly acclaimed play by Anupama Chandrasekhar. This Nightwood Theatre production is directed by Kelly Thornton and stars award-winning actress Anusree Roy. "A gripping and insightful story"  (Time Out)

The special evening was hosted by Dora award-winner d'bi.young and began with a reception and a silent auction of “Toronto Island Experiences”, such as:


The 90-minute performance was followed by a short talkback with the author and actors, dessert, and a last bidding on auction offerings and a draw for door prizes.

If you couldn't join us and would like to make a donation, you can donate on our Grand Night donation page .

All proceeds will go to the Stephen Lewis Foundation.